Visit all of our sponsor & vendor tents! 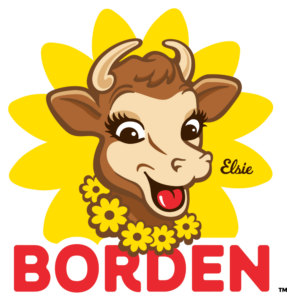 The story of our company, Borden Dairy, begins in the 2000s, when Borden Inc. underwent a series of reorganizations. In 2009, Grupo Lala purchased the dairy business, National Dairy LLC, and later established its U.S. operations under the name Borden Dairy Company, to once again acknowledge the lasting legacy that Mr. Borden left on the industry. Eight years later, in 2017, ACON Investments became an investor.

Today, Borden Dairy Company is headquartered in Dallas, TX and operates 12 plants and nearly 100 distribution centers in the Midwest, Southern and Southeastern regions of the U.S. We offer 35+ products that are enjoyed by millions and remain a staple in the dairy industry. Borden Dairy Company is currently ushering in an exciting period of growth and development as we introduce Elsie to the next generation of consumers with the help of our new ownership and executive team.

Let this FEST Sponsor know you were here at their booth. Each visit gets you ONE ENTRY for the prizes below!


Let this FEST Sponsor know you were here! CLICK OR TAP the Seek ‘N Find logo above to enter!